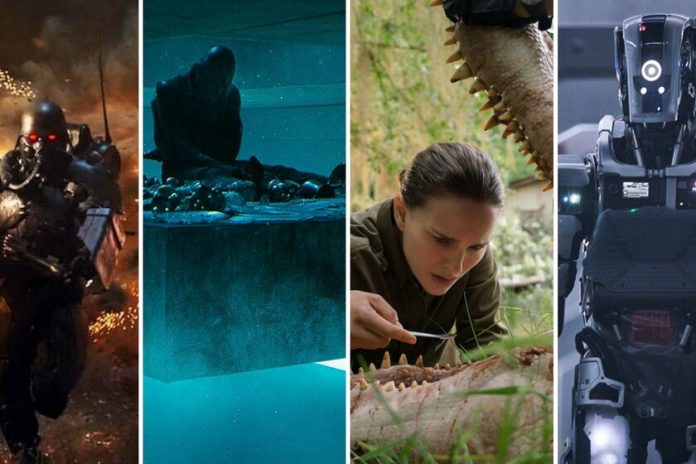 It is very good to recover science fiction classics from among the dozens that we have on streaming platforms. But sometimes even more satisfying is investigate the little hidden gems that went partially unnoticed in their day and that can be a pleasant discovery among all the tidal wave of weekly news. We have selected some of the not-so-well-known sci-fi movies that you can enjoy right now on Netflix to show that, apart from the blockbusters, there is much more on your screen to pay attention to

A very nice curiosity about a group of young people who are isolated in a cave where time passes at different speeds than abroad. What could have given rise to a ‘Twilight Zone’ story (when they go out they meet their grandchildren, or something like that), decides to step on the accelerator of nonsense, and it works as a speleological adventure film and, at the same time, as a piece of excessive science fiction minuscule. A fun and shameless little gem.

Between ‘Snowpiercer’ and ‘Parasites’, Bong Joon-ho directed this interesting and controversial film, with an angry and forceful environmental message, and that attacks the meat industry and the capitalist system disguised as a youth adventure film. In it, a girl tries to rescue a huge sow that is going to be slaughtered as part of a completely new and inhuman food industry, and Bong Joon-ho uses that starting point to pose a satire that leaves no head puppet, of the irresponsible carnivores to naive activists.

Following in the plot footsteps of a semi-forgotten B-movie from the late seventies, ‘The Destroying Ray of the Unknown Planet’, but with a less feral philosophy, this curious adolescent odyssey kicks off when a kid finds a weapon of alien origin and devastating power. Between his brother who has just been released from prison and still has issues to settle and the rightful owners of the gun who are searching for him, the film is an entertaining mix of family drama and chases with rare arsenals worth recovering.

The great Maika Monroe (from ‘It Follows’ and ‘The Guest’, perfect for these resourceful sufferer roles) is victim of an artificial intelligence programmed by a wacko, in a claustrophobic thriller and aesthetically very suggestive. Fast, violent and intense, this ‘TAU’ can be hit in its final stretch, but the truth is that it gives just what it promises: humans against robots in cold and hostile environments.

In the near future the two Koreas have reached an agreement to unify, while the sectors against the union are increasingly violent and aggressive, even committing terrorist acts. A police force is created to contain them in this dystopia of breathtaking action sequences inspired by the mythical anime ‘Jin-Roh’. A superb blockbuster which makes it very clear the superpower of cinema that Korea has become thanks to the good work of authors such as Kim Jee-woon, director of films like this one, ‘I found the devil’, ‘The good, the bad and the weird’ or ‘2 sisters’.

Partially unsuccessful, inferior to the Jeff VanderMeer book on which it is based, but ambitious and worthy of much more luck than it was. Initially produced by Paramount, it had an erratic distribution and ended up being released as a Netflix exclusive in many countries. Drinking from the atmosphere and some plot elements from Tarkovsky’s legendary ‘Stalker’, tells how a group of scientists enter an area of ​​unknown origin and where physical laws do not apply. A marvel of Alex Garland, director and screenwriter of ‘Ex Machina’ and ‘Devs’.

It did not go unnoticed (in fact, thanks to Netflix it became an international success) but it should not be forgotten this wonderful Spanish dystopia, highly metaphorical content but can be interpreted almost literally: the system is devouring itself. A huge moat serves as the setting for a macabre survival game in which random positions determine who will enjoy what others leave behind. Beautifully performed and with considerable venomous humor, it is one of the most inventive and feisty sci-fi films of recent years.

An interesting sci-fi thriller in which a teenage girl (Clara Rugaard, the film’s great discovery) is raised in an underground shelter by a robot mother. The relationship between the two is threatened when an unknown woman (Hilary Swank, also great) appears who makes the protagonist doubt about everything the android has told the young woman about the outside world. A film that recalls the genre in its most literary aspect, by combining fun and suspense with torpedo-messages, direct to the waterline of our beliefs about ourselves.

An interesting mixture of horror and science fiction that starts from the origin of one of the superheroic myths par excellence: Superman. A baby of alien origin falls near a farm, and a married couple who find him decide to raise him. But soon the child begins to develop powers, and does not use them to do good, precisely. An unhealthy and clever perversion of the story of the good-natured, fast-paced and excellently written superhero by Brian and Mark Gunn, James Gunn’s brothers, with whom they seem to share much of their bad luck.

A true Chinese blockbuster, which unlike many other films that triumph exclusively within the country’s borders, has achieved international relevance thanks to Netflix. Here and Based on a novel by the great star of Chinese literary science fiction, Liu Cixin, the Earth is destined for catastrophe, and the idea that is carried out to rid the planet of its destiny is to remove it from its orbit. But … what happens when Jupiter’s gravitational force is too strong? Humor, adventure, family drama and a lot of spectacular science fiction for a film very different from the catastrophic cinema used by Hollywood.

Halfway between the video clip and the experimental anime, ‘Sound & Fury’ is a post-apocalyptic animated film that puts images on the album of the same name, sixth in the career of multi-award winning country artist Sturgill Simpson. It is directed by a team of directors such as the historical Kôji Morimoto or Junpei Mizusaki, who recently signed ‘Batman Ninja’. An amazing trip to a dystopian future to the rhythm of acid rock guitars that make up a type of experiment that we would like to see more often on the platforms of streaming.

Two films in one (a low intensity post-apocalyptic drama and a space adventure) that have some difficulty in coming together, but whose set It is worth it thanks to the care that George Clooney, director and protagonist, puts in portraying his characters. On an Earth doomed to extinction, a scientist refuses to leave his laboratory in the Arctic, trying to warn spacecraft in orbit, on different missions, of the fate of the planet. But one day he meets a girl who has stayed with him by accident, and with her he will try to contact an approaching ship. Emotional and hopeful.

In 2092 the Earth is uninhabitable, and while the privileged have settled in an Eden that generates a large amount of space detritus, others with less luck are dedicated to subsisting by reselling this scrap that floats in the cosmos. A group of these space sweepers is in one of their jobs a humanoid girl wanted by different forces, as she carries a powerful weapon inside her. Another recent Korean blockbuster, familiar and full of humor, with first-rate special effects and secondary characters as great as that responsive but efficient robot.